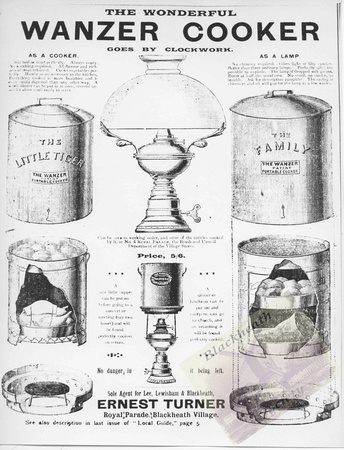 The Wanzer Cooker was advertised by Ernest Turner who occupied No 1, Royal Parade (now Kershaw's Estate agency) from 1892 to 1895, and then briefly Nos 4 and 5. (Both now Chapters).

Turner spent a lot of money on advertising. In 1894, he was particularly prod that he had sold two and half tons of his favourite marmalade in a month.
Category:
Subcategory:
Subcategory Detail:
Keywords:In Focus, Too Bright, Two Faces, Long Shot, High Quality, 1894, Unknown Copyright, Food
© The Blackheath Society