Founded in 1889 by Charles North, the Blackheath Local Guide and District Advertiser can claim to be a unique addition to the archive. We have on record all copies of the publication but some, particularly the earliest ones are currently too delicate to scan and publish. It began as a fortnightly 8 page advertising medium with a few details of local train and omnibus timetables which was delivered to every household in the district. Within 5 years it reached 5000 and the number of pages had grown to 64. First printed at No 3 Blackheath Village, print facilities moved to Alexandra Hall (Lloyds Bank building) on the corner of Cresswell Park in 1892. In 1907 the Blackheath Proprietary School which stood on the site now occupied by Selwyn Court closed and North moved printing to the empty school premises in 1909.

North died in 1915 aged 68 and the business was taken over by Victor Mitchenall, whose editor, Walter Davies, was responsible for its continuing success. Davies had been North's apprentice in the 1890s and worked for the Blackheath Press for 68 years and developed an encyclopaedic knowledge of Blackheath life.

Wartime economies meant the number of pages were much reduced but the paper continued publication until August 1957. The business closed in 1958 when Davies retired at the age of 82.

There were unsuccessful attempts to revive the journal, firstly as the Blackheath Reporter, by Thomas Bryant in Sept 1959 and again in 1986. From Aug 1986 to Sept 1989, Desmond Pritchett published the Blackheath & District Reporter, renaming it The Guide in Oct 1989. A rival, the Blackheath Gazette, was started by Steve Palmer in 1986.

We have a complete set of these publications (probably the only one in existence) but not all have been scanned as their state is too delicate. The earliest online is July 1902 which is Number 15. 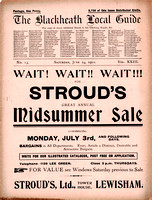