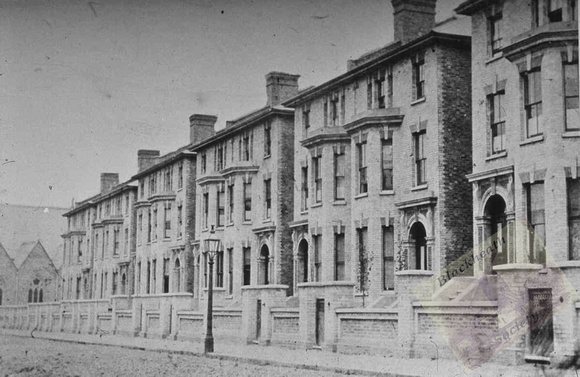 On the left is the Wesleyan Chapel and then Nos 1-4, which were irreparably damaged by the V2 in March 1945.

These houses were replaced by Wyattt House (built for the Metropolitan Police and then transferred to the local authority) in 1955.

Nos 5 & 8 were owned in the 1870s and 1880s by George Alexander Dick who probably installed the first telephone in the district in 1881 so the family could communicate between the houses.
Category:Architecture and Structures
Subcategory:Buildings
Subcategory Detail:
Keywords:1865, Architectural Features, BS, Dick, George Alexander Dick, High Quality, In Focus, Lamp post, Unknown Copyright, Unknown photographer
© The Blackheath Society