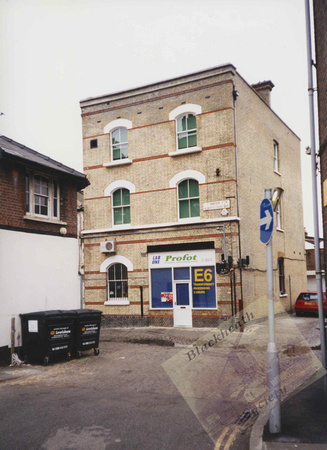 Brigade House used by Lab One in 2002

This was erected as a fire brigade station in 1871. Throughout the early part of the C19th, the only hope in the event of a fire, was that neighbours would turn out to save possessions and that there was a water supply nearby.

The history of the local brigade proved uneventful and the only major blaze they had to tackle was in January 1880 when No 60 Granville Park was destroyed. "Unfortunately, the calamity was made far worse becaues volunteer fire fighters claimed they were hampered by the local professionals and the building blazed away while rivals stood on the pavement and argued" (Neil Rhind).

The motorised fire engine rendered the station unnecessary and it closed in 1909.