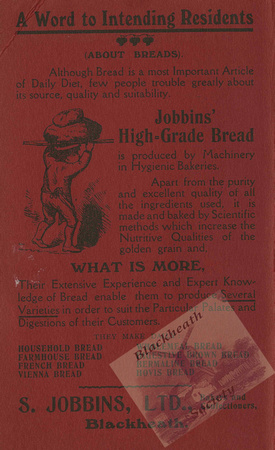 Stephen Jobbins was the son of G.F. Jobbins who who had opened his bakery at No 21 Montpelier Vale (http://goo.gl/Ag3UJw) in 1856.

From 1900 he increased the space for the restaurant side of the business, calling this "The Luncheon and Oriental Tea Rooms" and "fitted ladies and gentlemen's lavatories and a hot and cold shower bath "for use of football clubs, etc". An awning was erected over the flat roof of the front extension so that patrons could enjoy their tea in the (partial) open air and watch the life of the Village flow before them" (Neil Rhind, p52). Plain teas were available for 9d (4.5p) and "additional creature comforts" for 1/- (5p).

The business expanded to other branches in Lewisham, Lee, Eltham and Mottingham.

In 1926 he employed a patissier from Harrods. The baker was taken over and by the late 1950s had become part of Ranks, and a branch of Ackerman's. Despite being part of the Rank-Hovis-McDougall empire, it continued to trade under its own name until 1985 when it closed.