Created 24-Feb-16
30 photos
Wemyss Road: All of the present houses were built between 1880 and 1883 to a single design by George Gorrum. Only No 36, of an unusual shape in order to fit it on a small site, was different. The presence of the High School and the use of the Village end of the road by the Express Dairy Company for a bottling depot (now occupied by The Point) reduced the amenity of the street and many of the houses had been turned into flats or lodging houses before the 1914-18 war.

The building on the north side of Wemyss Road, once a food depot for the Express Dairy milk floats, was built as a stable and used by the Blackheath Riding Academy during the 1930s.

Nos 1-3 Wemyss Road were originally part of Bath Place and demolished at the end of the C19th for the Express Dairy depot, which was subsequently converted into light industrial premises by Hewlett & Sons in 1982. Nos 4-9, three pairs of semi-detached houses were severely damaged by the V2 in March 1945. The site was acquired by the police authority in 1951 who built a block of flats, Wyatt House, there. In 1975 these were sold to the London Borough of Lewisham.

The Blackheath High school was a public day school for girls established in 1880 as a result of local demand and parochial action. There was an urgent local demand at that time for a secondary education that would prepare girls for the universities, training colleges and professions.

Before 1880 very few girls were educated to university entrance level. Girls' schools were of two types - charity schools for the poor and Schools of Industry for the not so poor, and a host of private schools, run for profit, often very small, teaching some mathematics, a little French, calisthenics and natural philosophy.

Maze Hill was the favoured location of girl's schools but this changed in 1880 with the opening of Blackheath High on the corner of Wemyss Road and Paragon Mews (now Paragon Place).

Opening on January 19th 1880, it had a complement of 300 pupils by 1881. It entered pupils for the Cambridge Local Examinations (equivalent to the GCSE) and won scholarships to Lady Margaret Hall, Girton College and Bedford College.

The school was evacuated to Tunbridge Wells during WW2, with much of the main building requisitioned by the Army Pay Corps. It returned in 1945 but again suffered from lack of space.

In 1990 the Church Army Training College was bought and adapted for a new senior High School. The junior department was located in Wemyss Road.

The Blackheath High School suffered few of the traumas and upsets of the Blackheath Proprietary School. It was based on strong financial ground and its purpose was clear: to educate girls to university standard regardless of income and social status. This last concept was aided by a system whereby the parent paid fees according to means and by the granting of places to bright girls from local authority schools where the local authority paid the fees.

Bath Place: Until the development of Wemyss Road in the 1880s it was possible to travel only a few yards along the road before being stopped by the meadows and gardens held by the owners onf Nos 22 and 23 Montpelier Row. But at the end of this short roadway, in a dell to the south, was a cluster of small cottages known as Bath Place. By the 1840s a small hamlet of 19 cottages were established. The bat Pace houses were the homes of the labouring poor, the gardeners, the cabmen, laundresses and charwomen, matched by the the tiny courts of Camden Row, Phoenix Passage in the heart of the village and Munro's cottages between Grotes Place and Eliot Place. They were ill-drained and poorly served for water, this being available only from a common pump in the roadway. In 1853Dr William Carr was quoted as saying that between July and eptember 1849 there had been 4 deaths from cholera in Blackheath "...two at a filthy spot called Bath Place...unfit for habitation except for Twentyman's and Smith's cottages". Neil Rhind, p148.

The development of Wemyss Road in 1879-80 and the leasing of 22 Montpelier Vale by the Express Country Milk Company led to the building of a new bottling depot and creamery where 3 cottage had stood. Bath Place came to an end in 1939 after a public inquiry confirmed municipal clearance orders, followed by the V2 in 1945 which completed the demolition.

Hewlett's industrial works occupied the area where The Point now stands for a time. 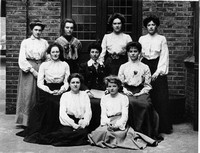 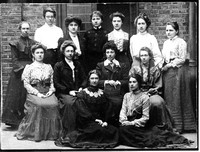