Created 11-Oct-18
33 photos
In financial difficulties, the directors of the Concert hall Company offered its building to the Ministry of Works in March 1940. The Ministry, remembering 1915, was eager to oblige. While it was the intention to reopen the Concert Hall after the war the company found that the government rents were useful and, in 1945, the directors saw no merit in attempting to restore and open the building for its proper use. As time went by, the likelihood of restoration receded. Most of the original shareholders in the company had died or had left the district when the 1939-45 war started. So, by the late 1950s there were a declining number of Blackheath people who remembered concerts at the hall and newcomers felt no affection for it. As a result the building remained in government use, most recently as a national service medical and assessment centre, as an office of the Ministry of Health and, finally, as part of the Department of Health and Social Security.
By the 1960s the Hall was a dwindling asset for its lessees. Attempts to interest the local authorities in taking over the building had come to nothing. The original lease granted by Albemarle Cator in 1894 was due to expire in 1983. And there was no guarantee that it would be renewed without the obligation to repair - a requirement beyond the company's means. Then the ministry decided that it would finally leave and by December 1976 the Concert Hall was empty.
It was rescued by the Blackheath Preservation Trust
Stephen Moreton-Prichard took these splendid black and white photographs in the 1970s, when the Blackheath Halls were being used as Government Offices. 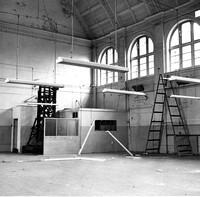