Morden College was built between 1695-1697 by Sir John Morden. Morden was "...a Citizen born, and a Turkey merchant, who brought home with him from Aleppo a very fair estate. Divers years before his death he erected a very fair and spacious structure, in form of a College, at his sole charge, not far from his own habitation, and call'd it Morden College for reception and harbour of the poor, decay'd, honest merchants..." (John Strype in Stows Survey of London, 1720).

There is little evidence that Sir Christopher Wren was responsible for designing Morden College although it is possible that his master mason, Edward Strong, was involved.

The original College was built to support the needs of 40 merchant pensioners. There are now approximately 300 pensioners. Trustees of Morden's will were drawn firstly from the Turkey Company, then the East India Company and subsequently from the Court of Aldermen of the City of London. 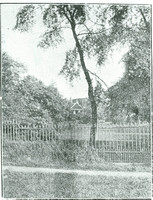