Created 7-Feb-18
37 photos
In 1807, a parcel of land, previously part of Kidbrooke farms, was leased to Alexander Doull, the Greenwich builder responsible for the development of Eliot Place. Cirumstantial evidence suggests that Nos 1 and 2 St Germans Place were built at the same time, between 1823 and 1826.

No 4 (Christ's College) is probably the oldest surviving building in Kidbrooke and has housed a boy's school since 1823. St Germans Chapel, also built in 1823, was severely damaged during the war and Nos 5a-5e St Germans Place were erected on the site in 1969.

Nos 5- 8 were originally built in the 1820s. However, they were also damaged during the war and subsequently demolished. The current No 6 was built in 1949 and the flats (Lynher Lodge), occupying the site of Nos 7 and 8 were built for the Metropolitan Police in the mid 1950s.
Nos 9-14 were built between 1823 and 1829. No 12 was first used as a ladies' boarding school but on her death in 1833, it became a private residence again.

Post war, St Germans Place was used as a site for "prefabs" (prefabricated houses), which were constructed to provide cheap and quickly constructed accommodation for those made homeless by the war. Prefabs seem to have been popular with those who lived in them and are remembered with nostalgia by many. The site of the prefabs in St Germans Place can still be seen in the colour variation of the grassland of the heath. 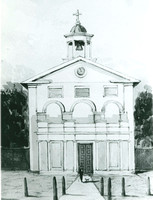 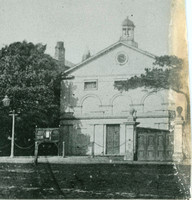