Built as private houses, commercial adoption of the premises was encouraged by the building of the railways station in 1849, with commercial users adapting the front rooms for commercial use. In 1893 the present shop fronts were extended over what had been private front gardens.

In 1961, plans were submitted to replace this whole group of buildings with shops, flats and offices, partially built over the railway line. The plans were rejected because it would have stood in the way of of a projected motorway suggested by the Greater London Development Plan. The proposed motorway was abandoned due to massive public opposition.

In the 1980s the buildings were listed by the London Borough of Greenwich, on the petition of the Blackheath Society, on the grounds that the shops, however shabby, represented the historical heart of the Village in the face of another redevelopment proposal in 1986.
See http://goo.gl/QioQve for how different the Village could have looked if this proposal had gone through 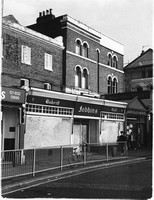