Created 11-Oct-18
128 photos
Although the Recital Room opened in December 1985 much work remained to do. The Large Concert Hall presented a formidable challenge but, without further public subsidy, it was necessary to concentrate on the business of bringing music and people back to the Concert Hall through the use of the Recital Room and the small Webster Room, named after the founder of the original enterprise.
The Board, under the chairmanship of Stephen Oliver, took a conscious decision to strive for excellence so that Blackheath could once again become regarded as one of the leading music centres in London.
In 1986 Alastair Creamer was appointed General Manager and since then the Blackheath Concert Halls has been alive with music and activity.: Everything from concerts of early music to modern jazz, lectures, meetings, dinners and dances, church groups, films and wedding breakfasts. The list is endless.
Many great artists have performed since 1986 including the Allegri, Medici and Lindsay String Quartets, Tom Allen, Elisabeth Soderstrom, Felicity Lott, Antony Rooley, Emma Kirkby, Willard White, Ann Murray, Philip Langridge, Melvyn Tan, Steven Isserlis, John Lill, Radu Lupu, Robert Holl, Barry Douglas, Humphrey Lyttleton, Tommy Smith, George Melly, Richard Rodney Bennett and Marian Montgomery, Philip Simms and the Thomas Tallis Society.
The newly established Endymion Ensemble and the Docklands Sinfonietta join the list. The Blackheath Concert Hall has become an important venue for the Greenwich Festival.
More recently, repairs to the large Concert Hall have made it possible to make use of that magnificent auditorium and in December 1989 the first proper use of the space in almost 50 years was made with the recording of Brahms' 1st Piano Concerto by Peter Donohoe and the Philharmonia Orchestra.

In May 1990 the first public concert since 1939 took place in the large hall with a performance by Nigel Kennedy and his group during the Woolwich Building Society Jazz Festival. 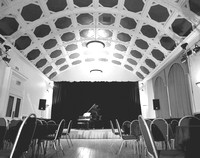