Created 24-Feb-16
40 photos
Cresswell Park was developed in 1828, probably by John Grice. He built a row of 6 three-storey houses, 4 of which (Nos 1-4) survive. They looked north across the valley of the Upper Kid Brook (now the railway line!) towards the Heath over the rooftops of of the small shops which had been recently erected on both sides of Montpelier Vale.

Alexandra Hall. Built in the mid 1860s, it was in public use until the mid 1920s. Harding's Blackheath Tepid and Swimming Baths were located there, with the main pool 56ft by 20ft. In addition there were several private hot and cold baths and were open from6am to 10pm every day except Sundays. Events held at the Alexandra Assembly, Lecture and Reading Rooms were diverse and it proved a useful central venue for entertainment and also protest meetings. The Blackheath Mendicity Society was run from there - established with the express aim of discouraging professional beggars. See pp 197-199 in Neil Rhind's "Blackheath Village and Environs, 1790-1990" for more detailed information on Alexandra Hall.

Bennett Park has the rather unusual distinction of having 3 Blue Plaques - Sir Arthur Eddington at No 4, Donald McGill at No 5, and the GPO Film Unit at No 47. (See Gallery 59 at http://goo.gl/MDX0w3) for more details of the Blackheath Art Club.

The Blackheath Art Club was founded in 1883, by Webster and others, to :

“promote social intercourse among gentlemen interested in science, literature, painting and music in Blackheath and the neighbourhood”.

The purpose-built studios at 47 Bennett Park were intended to be commercially self-sustaining and subsidise the building of the art school and conservatoire but it failed to do this. 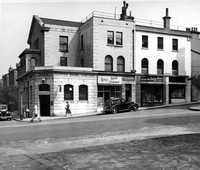