Galleries 2
Collections 0
Groups 0
For an interesting article on the Blackheath School of Art and Art Therapy classes for wounded soldiers in WW1, see http://bowleybear.blogspot.com

Webster and his friends established art and music schools for Blackheath on a non-profit making basis but created one institution to be run on stoutly commercial lines, in order to subsidise the building ion an art school and conservatoire. This was the Blackheath Art Club, constructed at the far end of Bennett Park.

Webster and his group set up the Government School of Art at No 41 Bennett Park in 1881, which became known as the Blackheath, Lee and Lewisham Government School of Art, moving to No 27 Bennet Park in 1884. Webster's ambition was to include an art school on the same site as the music school and concert hall and it opened for the Autumn term of 1897. The first principal John Howard Hale worked tirelessly for the school and created a highly regarded curriculum employing established artists as teachers including, Harold Nelson, Robert Austin, Alfred de Sauty and James Woodford. The school had 300 pupils attending classes in life, figure and landscape drawing and also applied art arts courses in subjects such as pottery, modelling, carving and sculpture, wood engraving, art needlework and graphic design drawing.

The success of the school led to the the building of a new studio block in 1907.

The Art School was affected by the Great War, moving to 5 Lee Terrace. with the Army Pay Corps from the Blackheath Concert Hall taking over the Art School. where they remained until 1921. From 1929 the Principal was John Platt, a skilled wood engraver, who remained until September 1940 when the buildings were again requisitioned for government use. During his time as principal, Platt attracted a number of important exhibitions to the school and also skilled artists as teachers including Charles Paine, Douglas Percy Bliss, Joan Herrin, William Clause, Reginald Brill, and Frederick Austin. In 1940 Platt and a couple of students from the school moved to nearby Goldsmith’s until it too closed due to the war. The Ministry then occupying the Concert Hall expanded into the Art School and stayed for the next 41 years. until 1982.

The Art School reopened in September 1983. Facing falling rolls and economic recession, with few students able to cover tuition costs, the management of the art and music schools was combined into the Blackheath Conservatoire for Music & the Arts in the early 1990s.

See Chris Morton's research into the history of the Blackheath School of Art and art therapy for wounded soldiers in World War 1 at
http://bowleybear.blogspot.com

00178. Blackheath Conservatoire of Music and the Blackheath School of Art

28000. Blackheath School of Art - Artists & Students and their work 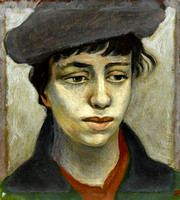